Ahead of the Flames 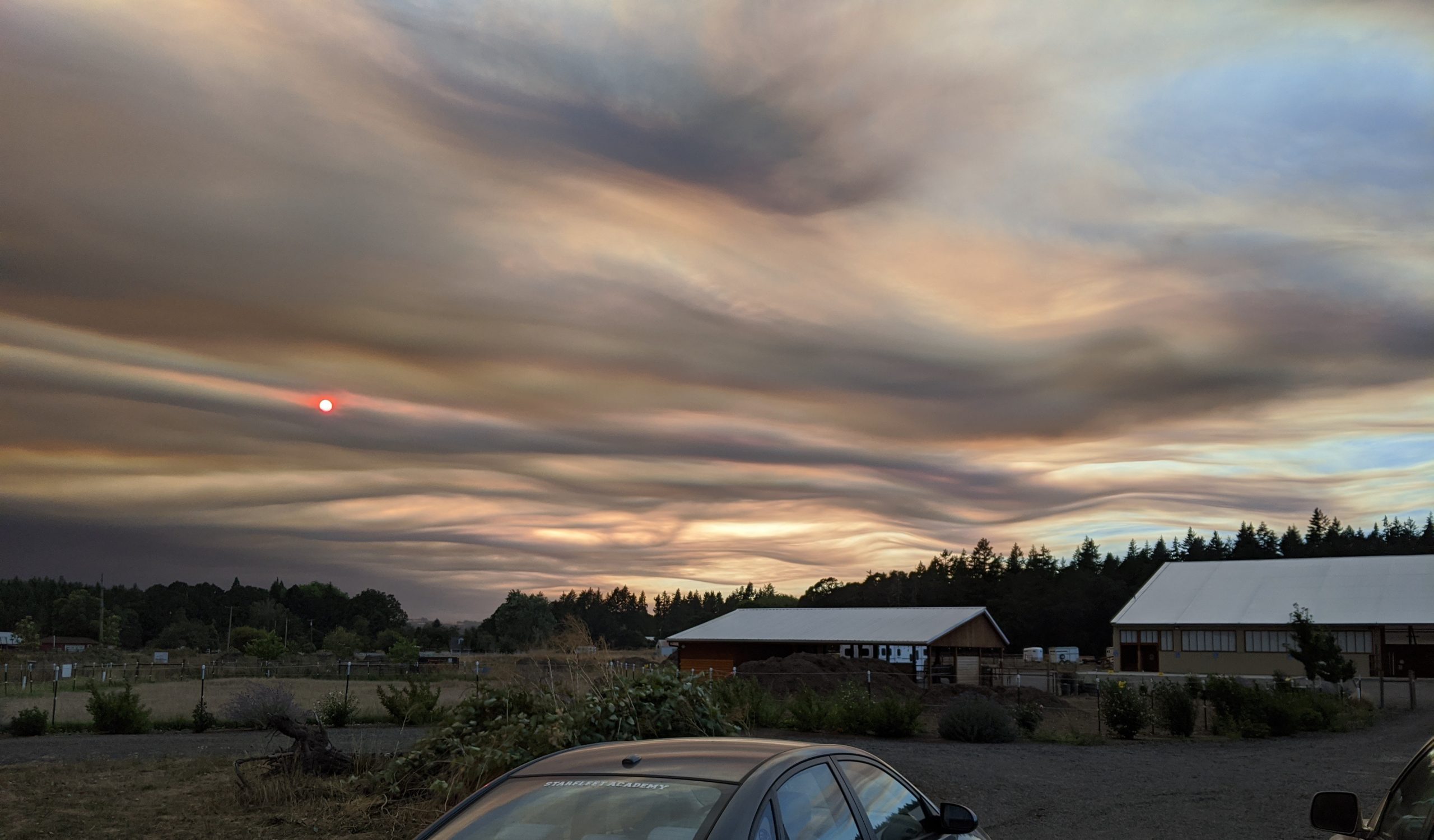 2020 has been full of unexpected twists and turns as we continue to navigate this new normal. On the night of September 3rd, 2020 we were swept away on yet another journey. What follows is a recounting of Forward Stride staff members’ experiences during the wildfire evacuation emergency in early September. It is a little longer than most of our featured stories, but we feel it is an important story to tell so we hope you will stick with us!

The staff at Forward Stride began Labor Day weekend on a camping trip to Sisters, OR to relax and enjoy the last bit of summer. A short day and a half into it we were told we needed to evacuate due to a spreading wildfire near the campground. As everyone packed up and left feeling disappointment and a bit of fear, we were unaware of the turmoil the next few days would bring with a windstorm in the forecast for Monday.

The winds began to roar the night of September 7th as a dark, ominous cloud of smoke from Central Oregon covered the skies. By the following morning, news began to spread that the fires were growing and new ones were popping up closer to the Portland Metro area. Our Executive Director Amber acted immediately, hooking up her truck and trailer ready to help in any way she could. Her journey lasted for 21 days as her and her family spent their time serving the community and helping many people get their livestock to safety. She blogged daily about her experiences and the stories along the way as most of her time was spent on the road hauling animals, trying to stay ahead of the flames. 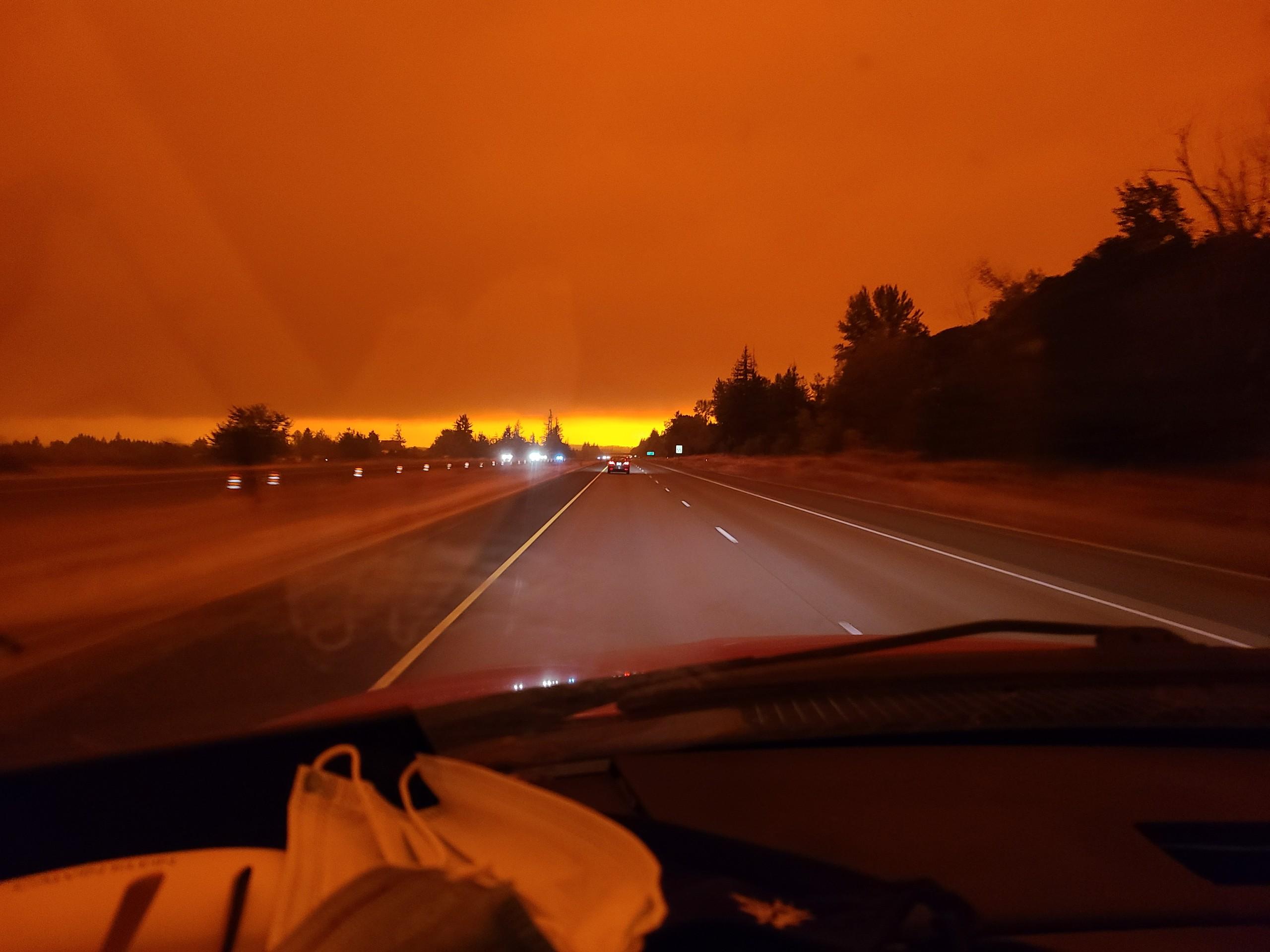 I headed out to pick up my girls from their grandparents in Stayton as they had received a Level 2 evacuation notice overnight. I hooked up the trailer as I left in case anyone needed evacuation of livestock down there. It was like traveling into an eclipse zone. The darkness was eerily overwhelming to drive into. The girls were scared, but calm. I brought the girls home and began putting myself in triage mode. Candi and I let Washington County know that we could take evacuated animals from the Powerline Fire near Hagg Lake. They took us up on it and we received 6 horses. I let Sound Equine Options know that I could haul, alerted them to other staff members who could haul, and that Forward Stride could take animals if necessary.

About an hour later, I got called to start hauling horses out. I loaded two very nice ponies for one lady and two older horses for another. All were taken to the old polo fields in West Linn. Thank you to Kathleen Waldorf for taking so many animals there. At that point, I received a request from a friend to help her haul 9 horses from Canby to Devonwood. I rallied our staff and friends and got enough trailer spaces to get all horses out in one load. 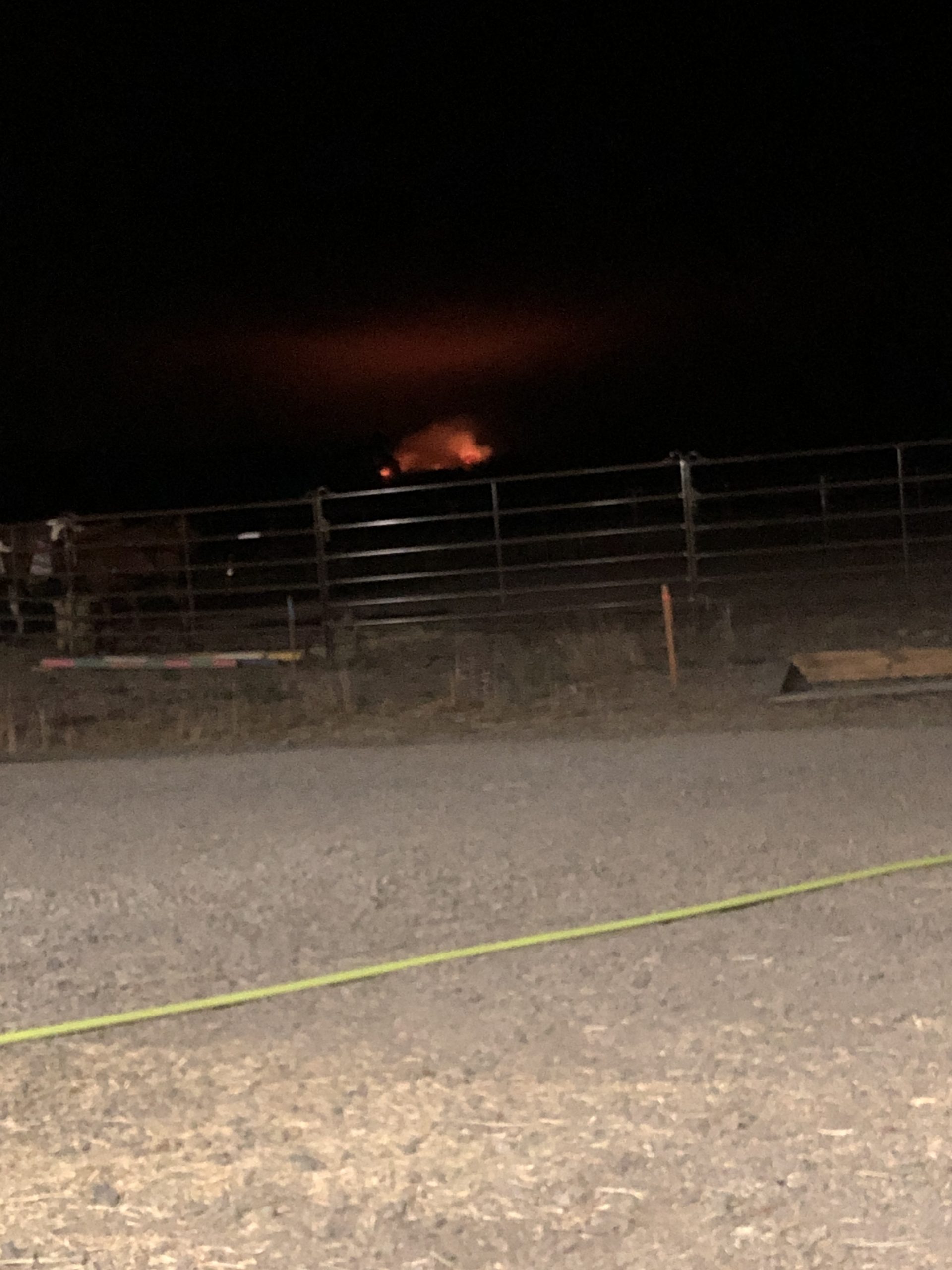 Later, I met up with the staff at Forward Stride where we watched the flames from the Chehalem Mountain Fire destroy at least 3 buildings. We were worried we would be evacuated if the winds shifted. Meanwhile, I got another call to haul 2 horses that were closer to the Beachhaven fire, a few more calls came my way. My last one of the night ended with driving out as they were issuing Level 3 Evacuation notice from police cars and loudspeakers due to a spot fire on Spangler Road. Whew. I did not return to Forward Stride until 2 AM where I unloaded three horses and stayed the night there, along with several other staff members.  A huge thank you to the Rattner Family and other staff at Devonwood for making room for over 230 horses and other animals at their gorgeous facility. Thank you also to Washington County for opening the fairgrounds and to the Sheriff’s Posse for their time to care for the animals there. 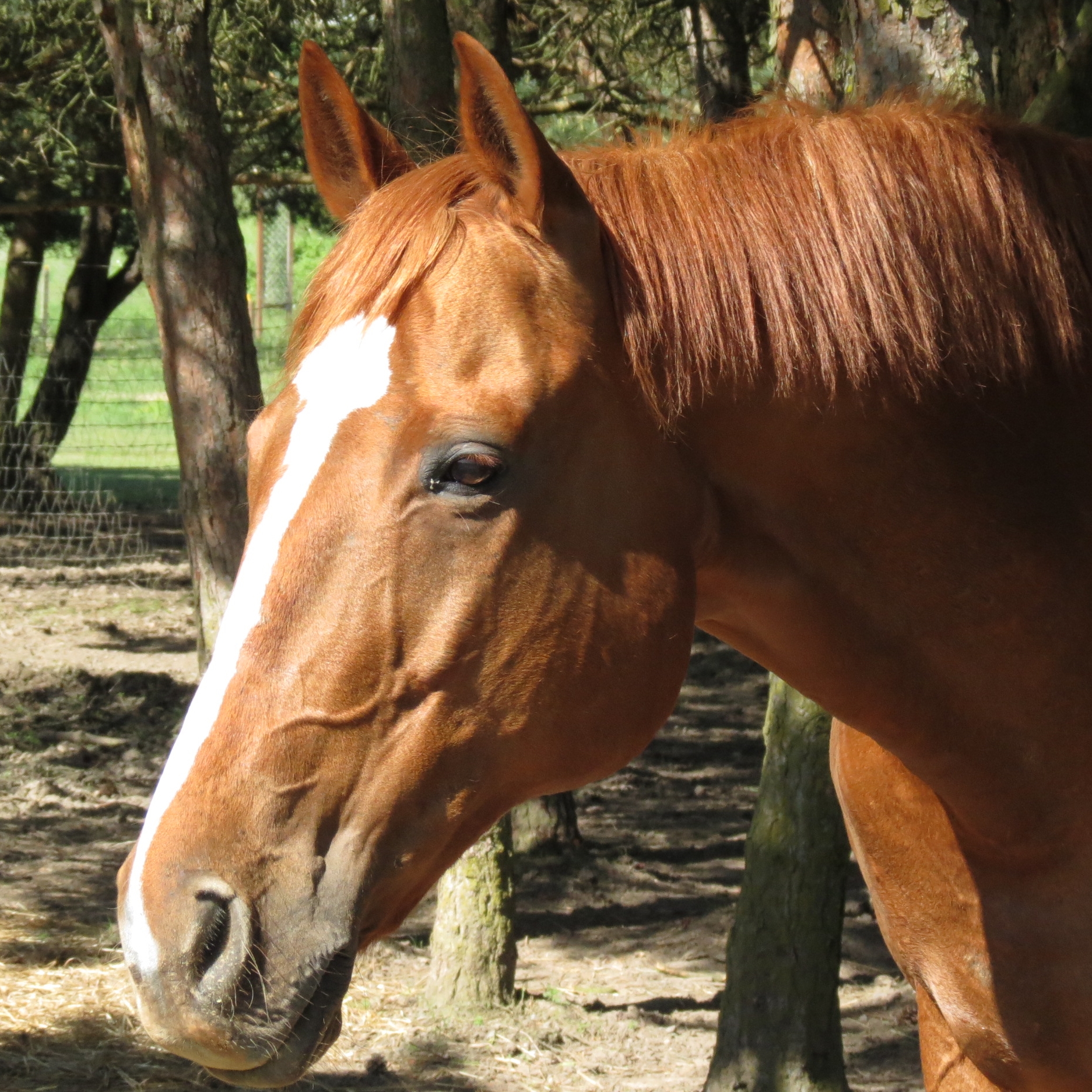 The following morning Amber woke up to the news that her own horse of 15 years, Mars, had been injured in his pasture. As she went out to check on him she realized it was more than just a small injury, as he was unwilling to move and his leg was useless. After immediately calling the vet, she wrapped his leg and held him up for 45 long minutes. Throughout this time she began realizing these were his last moments. Amber wrote:

One benefit of the long wait was that I was able to call some of Mars’ closest human friends to come say goodbye to him. I have never been so grateful to see our vet. Candi arrived shortly after with both of our girls to say goodbye to him. Later, I would find out that he had broken his leg and the puncture came from within. The prednisolone he took for his irritable bowel syndrome had made his bones too brittle to withstand collapsing on them in his sleep. I was devastated.

While all of that had been taking place, I had been getting news about the Butte Creek Scout Camp needing to evacuate the rest of their herd, but having trouble. I took off right away, thinking I might be able to make it there in time. As I drove, I realized that it was not going to be possible and instead pulled over to try to enlist aid on Facebook. I did what I could and turned around, realizing I should not be driving in my current emotional state.

Despite facing her own tragedy Amber continued to care for the community, hauling animals the rest of that day into the following week with the support of our staff. She writes:

By Friday, September 11th, we were officially full at Forward Stride. We had a total of 27 full-sized horses, 2 mini-horses, 2 mini-donkeys, and 1 goat as guests, effectively doubling our current occupancy. We focused on taking care of the giant herd and surviving the smoke. We received hay and feed donations, a wheelbarrow, gas cards, monetary support, and a lot of love from our community. The first of our guests got to go home! One more night at home for me.

While Amber went back and forth transporting animals, our Associate Executive Director Candi held the fort at Forward Stride. She spent countless hours coordinating haulers to bring animals to safety, along with caring for the herd at Forward Stride and being the point of contact for all evacuee animals on site. Her story starts Tuesday night as Amber began to bring in evacuated horses and she stayed on watch along with other staff.

We began receiving evacuated horses from the Powerline Fire around 4pm on Tuesday. Kristin and I prepared as well as we could to find space and places for them in empty pastures not knowing how many would come. As nightfall rolled in we spotted a fire along the ridge between Forward Stride and Newberg, which soon became known as the Chehalem Mountain Fire. I contacted Amber and the staff who were on the road evacuating horses to alert them as I was unsure of the danger and threat this had to Forward Stride. Amber, along with a few others, ran back to Forward Stride with trucks and trailers not knowing the severity of the fire. Many of our staff gathered together to make a plan of evacuation if needed. It actually started to feel real to many as staff wrote Forward Stride’s phone number on all of our horses hooves in case of emergency. We were up until 2AM watching the fire intently until our eyes could no longer stay open. Five of our staff, including myself, stayed the night on the property in case of emergency.

Throughout the week I stayed there several nights, even one with my husband Tom, to give other staff a break. Many more horses came to Forward Stride over the next few days to seek safety. Our staff worked tirelessly around the clock to care for our herd and our evacuees. Our community stepped up, feeding us many meals and mucking many stalls and pastures. We felt so loved and supported.

Each day that followed brought its own new challenges. The winds changed, the amount of horses we took in grew and the smoke became heavier. Different staff stayed every night throughout this whole week. We received an overwhelming amount of support from our community and volunteers, willing to help in more ways than one. We could not have done this without them. By Friday the 11th, we had received 32 evacuated animals, doubling our occupancy. Our staff built pens and divided pastures to maximize the space we had to accommodate our guests. 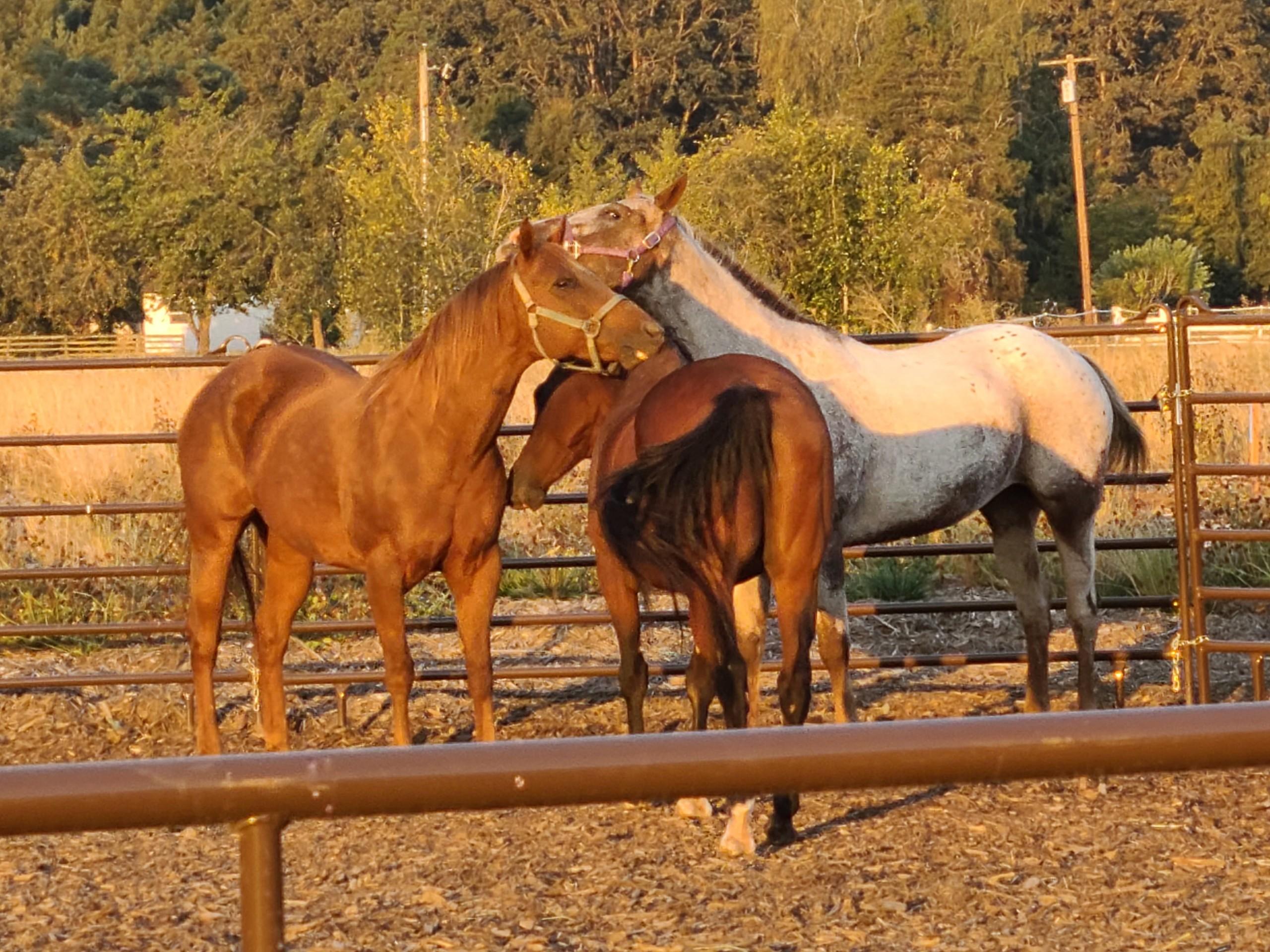 Danger began to lessen slightly as the weekend arrived, yet the smoke remained extremely heavy and the air quality remained in the hazardous zone. Our Equine Coordinator, Mackenzie, began the research on how this was going to affect our herd as many of us could feel it in our lungs after a few short days. Here is her story:

When the smoke set in after the wildfires, I immediately felt it in my lungs. I knew I needed to find out how it was going to affect our herd. Smoke and hazardous air is a new concept to the Pacific Northwest, as we do not frequently encounter the severity of wildfires that we did this year. I turned to the knowledge of veterinarians in California to see how they handled these wildfire situations in their state. The UC Davis School of Veterinary Medicine has done extensive research and published a comprehensive article about how smoke affects horses and how to assess and treat smoke inhalation in them. In conjunction with our local veterinarians Pacific Crest Sporthorse and Northwest Equine Performance, we were able to come up with a plan to protect and rehabilitate our herd that was suffering from smoke inhalation.

Our first priority was figuring out how to best get our horses through the smoke filled days. We decreased opportunities for the horses to breathe deeply, heavily and/or quickly. Along with this we began wetting their hay to eliminate extra dirt and dust being inhaled while eating. Lastly, we increased the amount of vitamin E and added an omega-3 supplement per veterinarian recommendation. Upon consultation with our veterinarian, we purchased a nebulizer and nebulized horses with pre-existing conditions and those who presented symptoms of respiratory distress and coughing. 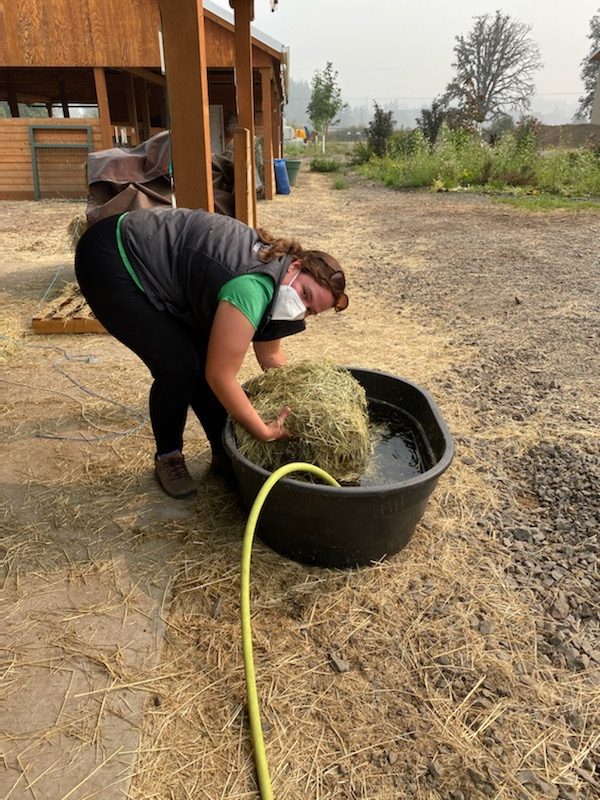 Once the smoke cleared we worked closely with our local veterinarians to put together a seven week rehabilitation program to bring our horses back to health and normal work. 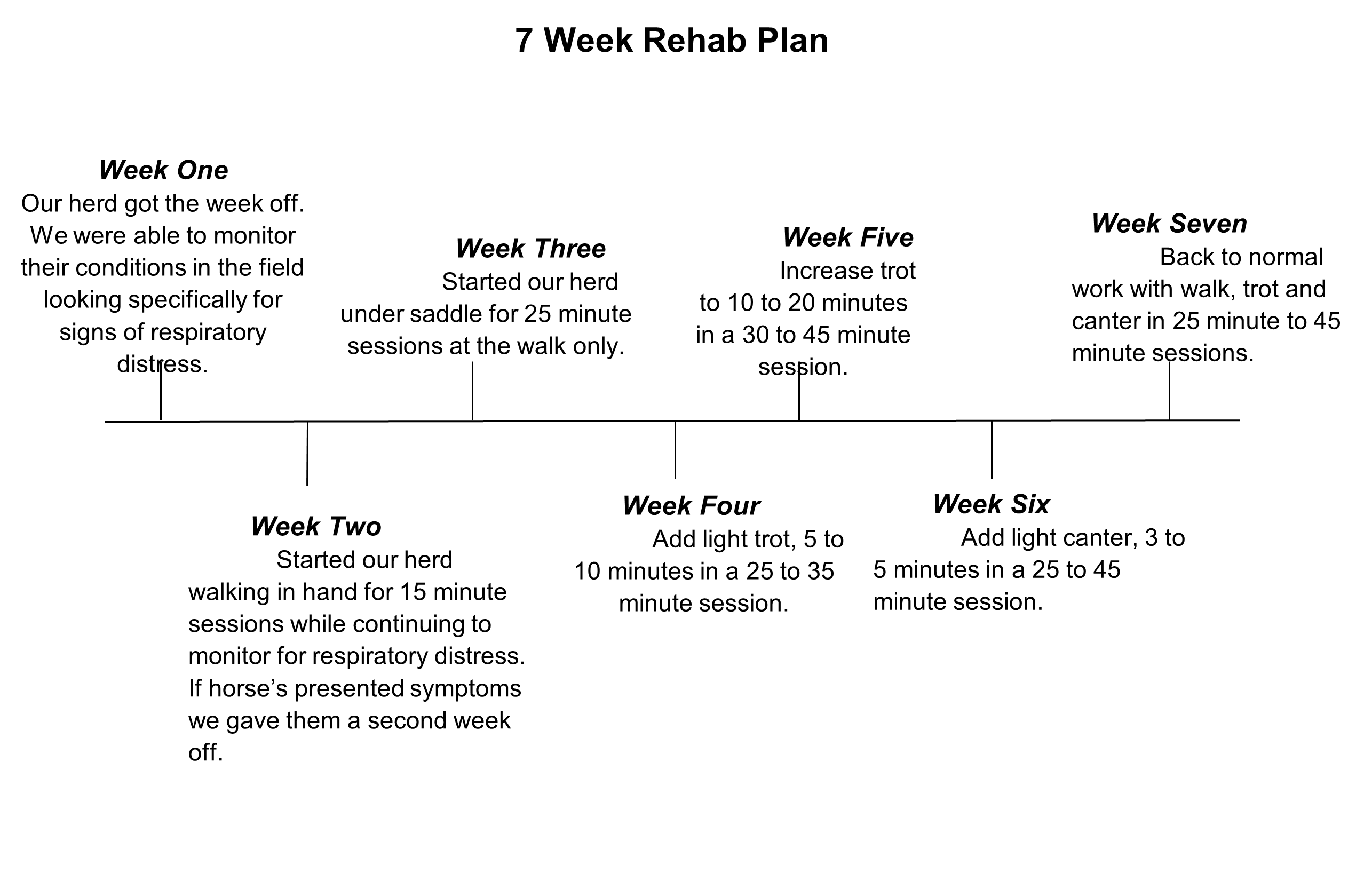 Throughout this seven week rehab program we are closely monitoring each horse by taking their respiratory rate and looking at their progression each week. This has and will continue to determine how we increase or decrease their workload. Our herd has done incredibly well so far and we will continue to monitor them until all are back to work as normal. 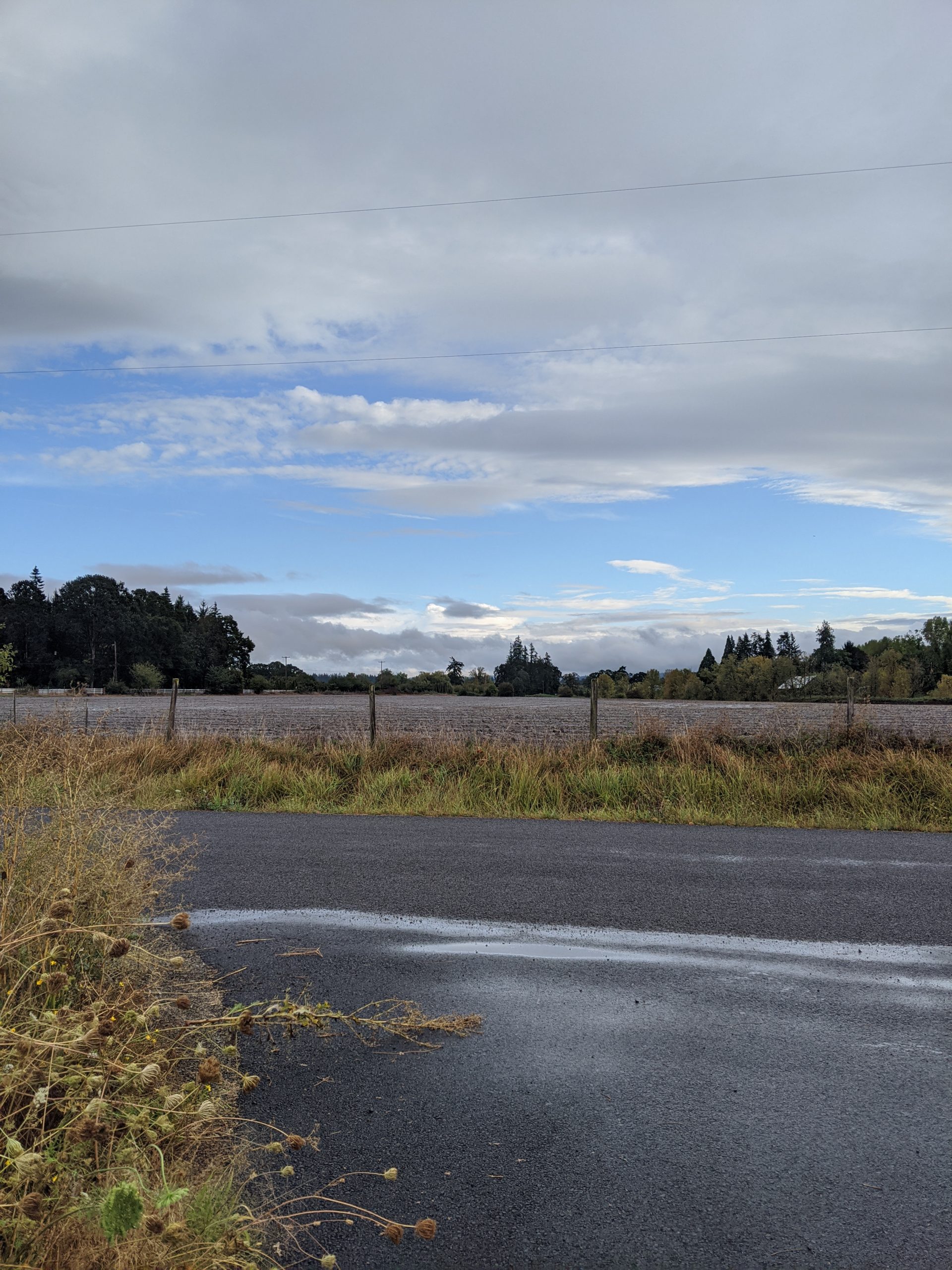 While we hope to never have to experience an emergency such as this one again, the resilience and support shown by our community makes us sure that we can weather any storm that comes our way. Our strength comes from you, our volunteers, clients, families, and friends. Thank you for supporting us through fair weather and foul.